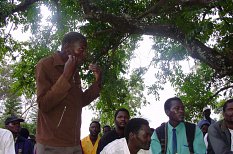 Wayne Dunn is an award-winning global CSR expert with extensive teaching, writing, lecturing and Advisory Service experience. He is supported by an extensive faculty and advisory team.

(The post below references a Stanford Business School Case Study.  The case study is available here, or you can open the full PDF, complete with the case study here)

The core principles of stakeholder engagement and corporate social responsibility (CSR) are simple.  But, executing on them is far from easy.

Readers of my recent articles have asked me for detail and examples of how the principles were applied.

This article will discuss this and look at how a complex challenge was successfully addressed through a focus on simple principles, strategic objectives and systematic execution.

It is really important to remember that no matter how complex the execution gets, you must always ensure that it is serving the underlying principles and strategic objectives.  And keep the focus, the metrics and strategies as simple and straight forward as possible.

A common problem is that people set up elaborate systems and processes and then somehow get caught up in them.

At the end of the day a big part of the success of any stakeholder engagement or CSR program will depend on the value that the engagement creates for the stakeholders, and for the company.

The attitude with which the engagement process is carried out is also critical.  Humility, openness, transparency, fairness, reciprocity.  Practice these rigorously and you’ll be surprised at the impact it will have on stakeholder relations.

Let me share an example from one of the most complex, and one of the most successful, stakeholder engagement/CSR projects that I was ever involved in. It was in South Africa with Placer Dome in the early 2000s. It is written up as a Stanford Business School case study and you can read the full case here.

Placer Dome was the first major international investor in the post-apartheid South African gold mining industry.  Starting with a disputed retrenchment that became a nasty legal battle and being named the World Employer in South Africa this analysis follows the transition to Placer being cited as an exemplar by union and government.

Shortly after taking control of the South Deep mine, located just outside of Johannesburg they retrenched 2,500 workers.

Retrenchments such as this were normal in the industry at that time.  100,000 workers in the South African gold mining industry were retrenched in the 1990s.   There were well established norms around how the retrenchments were structured.

Because of its sustainability policy Placer Dome did not follow the norms.  Even though they were offering the highest ever retrenchment benefits to the workers, relationships with the union and other key stakeholders deteriorated and ended up in court.

Placer Dome won the court case, with costs, but had severely strained relationships with the Union and other key stakeholders, including government.

They were named the “Worst employer in South Africa” and their efforts to implement their retrenchment benefit program (called the Care program) were resisted and rebuffed by many key stakeholders.

The workers were advised to resist collaboration with Placer Dome while legal challenges to the retrenchment progressed through the courts.

Placer Dome recognized the importance of the family level economic unit and made a commitment to work with the retrenched workers and their families to identify and develop alternative income generation opportunities.  This was driven, in part, by the company’s sustainability policy.

The Care program was the first time that women would be direct beneficiaries of retrenchment benefits.  This was partly in response to the burgeoning HIV/AIDS crisis that was sweeping across South Africa and a recognition that the HIV positive rate amongst the workforce was estimated at 30%+.

This was not a simple process.  The workforce was drawn from five southern African countries.  Their homes were mostly in remote communities scattered across a 3,500 x 500km swath of rural southern Africa.

Placer Dome was a mining company.  They had no direct infrastructure or logistics capacity to reach throughout the regions where the workers came from, nor did they have any history or experience in grassroots livelihoods development.

There they were.  New kid on the block.  Publicly opposed by some critical stakeholder groups.  An inexperienced local team tackling a formidable challenge under a glaring national spotlight.

On the ground Philip Von Wielligh set up and ran a team and   systems that enabled the project to keep moving forward.  At the same time he maintained an open and   proactive outreach and communication effort with key stakeholders at all levels (from the communities through to international organizations).

The team evolved into a group of about 30 workers, mostly retrenched mineworkers, scattered throughout the entire project area.

The project succeeded despite the seemingly overwhelming challenges.  Corporate leadership and on-the-ground execution were critical for sure.  So too was a strict adherence to some simple principles and not letting complexity distract from the ultimate goals and objectives.

There is no way this project would have even come close to succeeding without taking this principle to heart.  And they added in humility, openness and transparency.

Corporate leadership expected no less and Philip von Wielligh made sure these traits permeated the entire implementation team.

2. Think Value and Interests – and do it transparently

From day one the team was very clear that the company’s objective was to enable 70% of the workers and their families to become economically active post-retrenchment.

They also acknowledged that achieving this target was important for Placer Dome’s reputational capital and social license, in South Africa and globally.

but, disagree without being disagreeable. And stay curious

The project started off with Placer Dome in litigation with one of the key stakeholders, the National Union of Mineworkers. The union was tacitly supported by government and other stakeholders.  The company was in active disagreement with important stakeholders.

The Union vehemently and publicly opposed the project because they felt it was unnecessary.  They did not believe the retrenchment was done properly and that it should and would be overturned.

The project team didn’t try to deal with that disagreement.  Instead they looked for areas of common interest and avenues where individual and institutional relationships could be nurtured and developed.

They stayed open, stayed curious and found ways to constructively engage with the Union, government and other key stakeholders, despite the disagreement.

4. Do compliance but think and act strategic

– check the boxes yes, but that is just the foundation

In this case many of the ‘boxes’ were the data and process management systems and reporting processes that were set up to track and manage progress.

A lot of attention was paid to setting up these systems and ensuring that they were followed.  It was, for sure, onerous.  Especially with a far flung team or workers scattered throughout the project area and often without adequate communications.  Ubiquitous internet and cloud-based data management was far in the future.

But, reporting and process management never, ever eclipsed the real objective.  Everyone knew that they were only tools to help the project to help families to become economically active.

The ultimate objective or worker livelihoods remained clear.  Management systems and processes were used to serve that objective and not become an objective in themselves

From day one everyone knew that to succeed they needed partners. There were holes throughout the company’s ability to execute on the project.

The holes could only be filled by finding the right partners and giving them reason to engage.  The team needed to focus on the values and interests of the potential partners.

One key and early partner was the Mineworkers Development Agency (MDA).  This is important because they were the development arm of the National Union of Mineworkers, who had challenged the retrenchment in court and were vehemently opposed to it.

Fortunately Project Manager Philip von Wielligh was able to establish a relationship with MDA and identify common interests (one of the reasons MDA was set up was to help mitigate the socio-economic effects of the decade long series of industry retrenchments).

Fortunately Union leadership was able to see beyond a serious disagreement with the company and not prohibit the involvement of the Mineworker’s Development Agency.

Many other partnerships were developed, including with the Canadian International Development Agency (CIDA – now part of DFATD).  CIDA made their first ever major corporate social responsibility (CSR) investment and contributed $2 million to overall project costs.

This partnership provided CIDA with outreach and leverage and a greater social impact than they could have achieved on their own.  For the company CIDA’s participation gave a critically important stamp of credibility to the development program they were undertaking.

TEBA, the Chamber of Mine’s employment bureau and many other partners were brought on-board (see Stanford Case Study for some more information on partners).

What is important is that the company recognized that it had to share the credit and find ways for its partners to further their own objectives.

6.  Communicate so you are heard and understood

In this case communication was much more of a ‘show me, don’t tell me’ process.

With all of the active opposition and rhetoric surrounding the launch of the project, the company wisely did very little high level outreach communications.

Communication strategy was focused on direct outreach to potential partners and collaborators and on reaching and communicating with the retrenched workers and their families.

There wasn’t a grand communication strategy to let the world know about Placer Dome’s wonderful program and what they were doing for the retrenched workers.

That would have backfired spectacularly.  It would have provided a public focal point for opposition and served to further polarize an already difficult situation.

Instead the company simply put its head down and focused on the simple internal and only did those external communications that were necessary to enable it to do the job of helping the workers and their families to become economically active.

Eventually, as the project started to have real success at helping families, the communication focus changed.  But, often it wasn’t the company driving the communications, it was the partners who wanted to share the success that they were part of.

Often, others who had heard of the project, inquired about it and asked project leadership to give talks and lectures.